Apple announced app tracking transparency! What should APP developers do for advertising monetization?

Prior to this, Apple confirmed that it would launch the App Tracking Transparency (ATT) function on the official version of iOS 14.5. On April 5, Apple’s official website issued a statement: “Make sure that your app is ready for iOS 14.5, iPadOS 14.5 and tvOS 14.5. In the upcoming public version, all apps must use the “App Tracking Transparent” 'Frame to request user's authorization to track user or access identifier for advertising (hereinafter referred to as IDFA). Unless you get authorization to enable tracking from users, otherwise, the IDFA will have no value, and you may not be able to track users. " 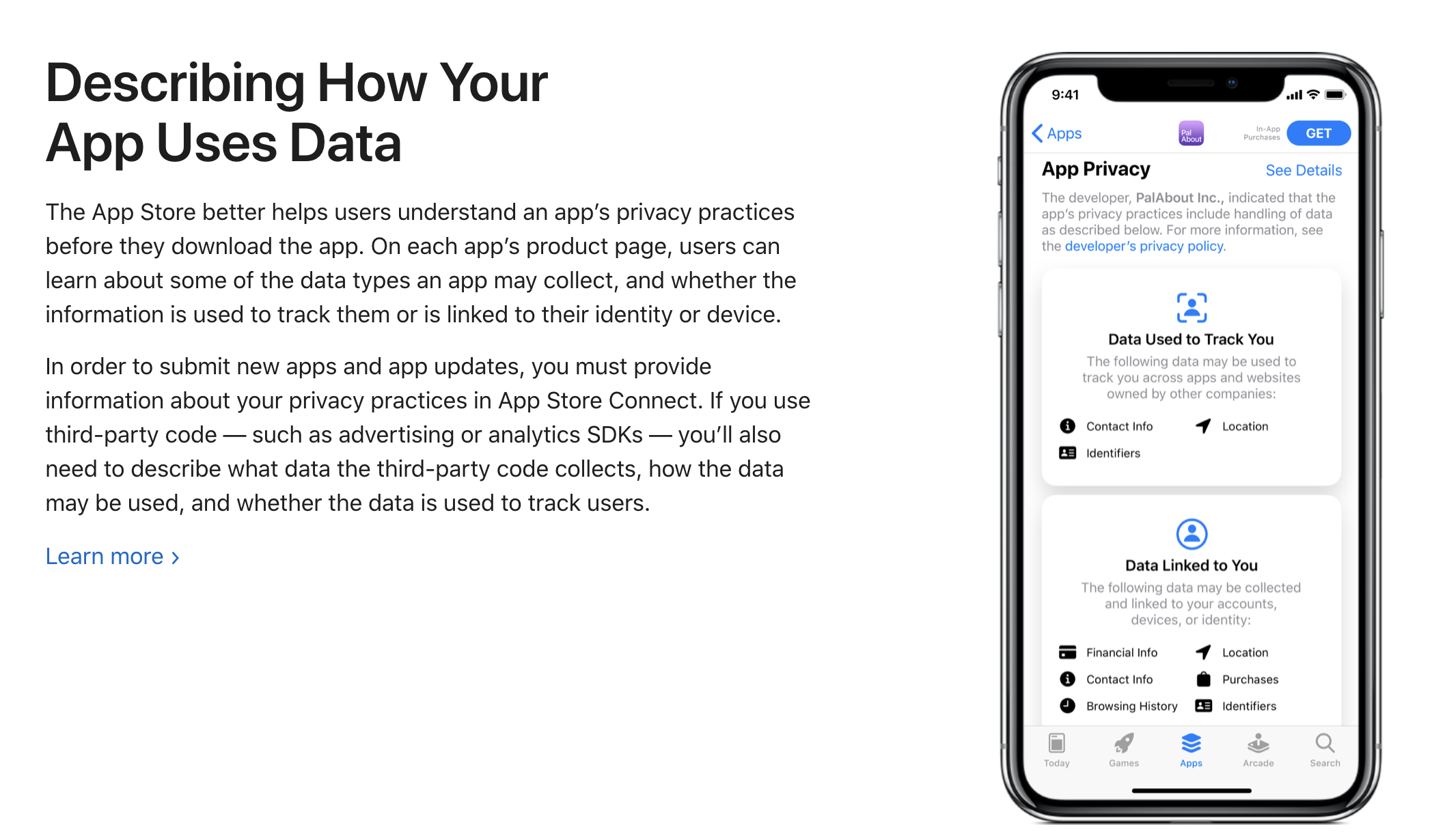 The statement also specifically mentioned: "The collection of device and users data for the purpose of obtaining the user’s unique identification or fingerprint will still be considered a violation of the Apple Developer Program license agreement." This means that developer designed alternative functions that circumvent anti-tracking effects also do not comply with Apple Store privacy rules. According to some industry insiders, Apple has realized that some developers have begun to try to bypass ATT's workaround, and have issued a warning accordingly.

IDFA acquisition process changes before and after iOS 14

In June 2020, Apple revealed for the first time at the Worldwide Developers Conference (WWDC) that it will make changes to IDFA (Identifier for Advertising). The IDFA sharing function will be turned off by default from the default on. If apps wants to obtain the IDFA of the user, it needs to clearly indicate to user in pop-up window to request authorization, otherwise it will not be able to obtain user information. 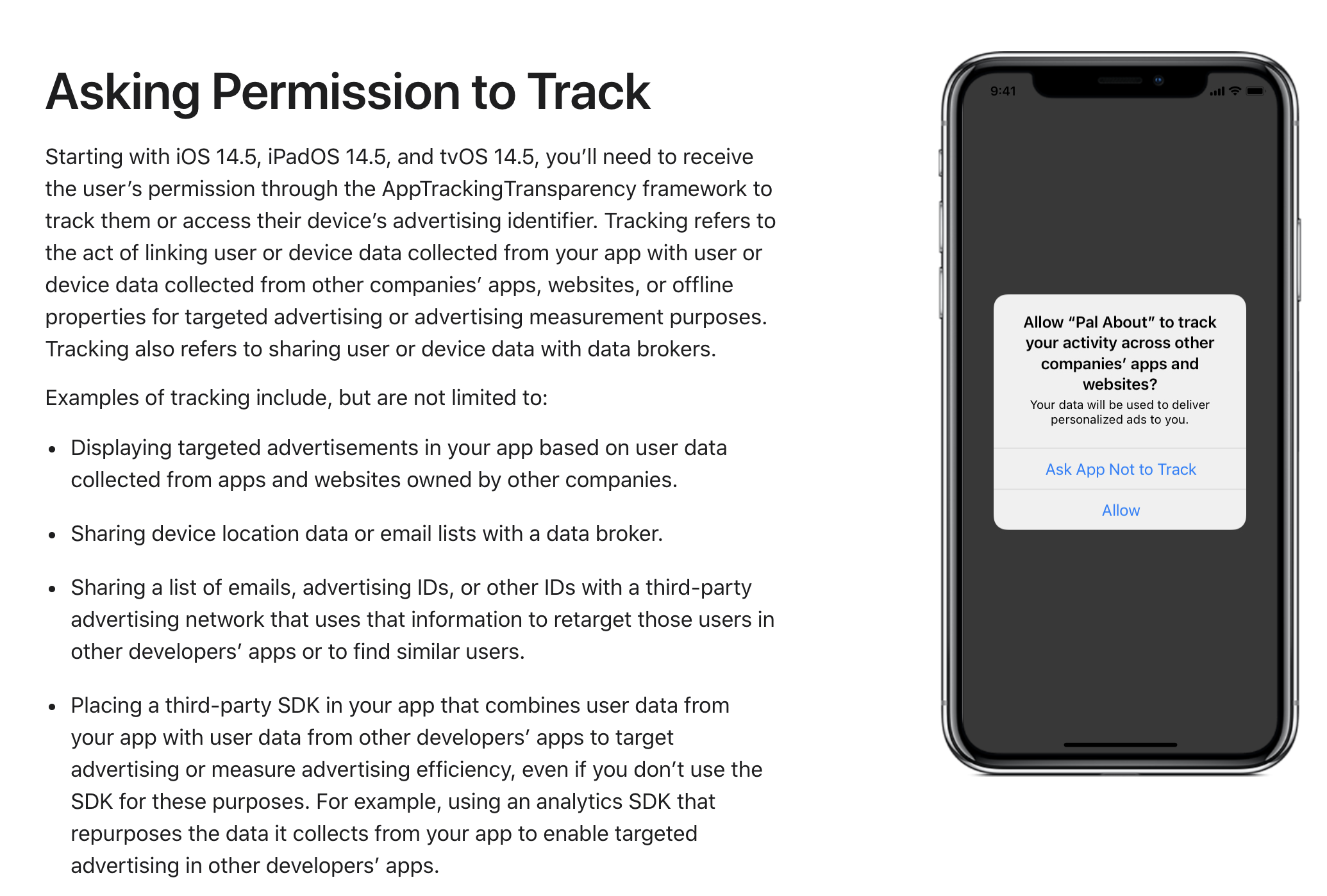 The role of IDFA in mobile advertising: cross-platform tracking of user behavior and advertising attribution analysis

The loss of IDFA caused a major blow to mobile digital marketing.

IDFA is like a user's "identity ID" online. User portraits and tags often need to be attached to IDFA to identify specific users' interests and preferences, thereby improving the accuracy of advertising and attribution analysis. For example: user sees a product advertisement in TikTok, clicks on a link to jump to Taobao to make a deal, the "device unique identifier" can associate user's advertising click behavior with the purchase behavior, and this technology is also used for the settlement of advertising effects. 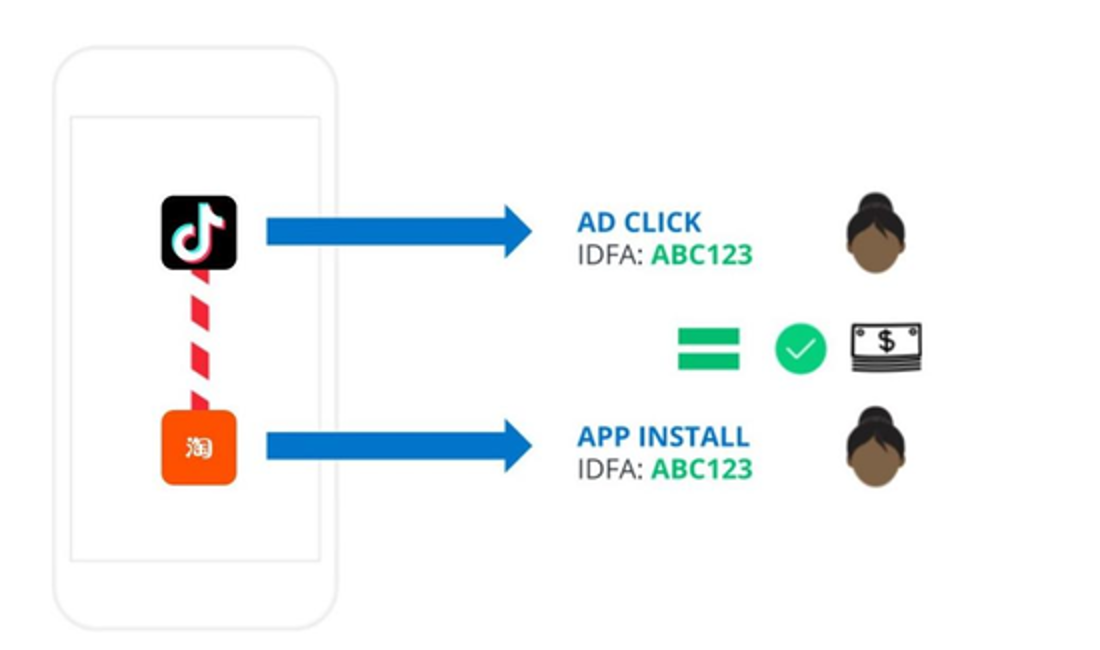 However, with the popularization of iOS 14.5, once the user IDFA is restricted, the above-mentioned information exchange situation may no longer exist, and the ability of some advertising platforms to push personalized advertisements will be weakened.

In response to the adjustment of IDFA access rights, Apple launched an alternative solution-SKAdNetwork.

In fact, as early as March 2018, Apple released SKAdNetwork 1.0 on iOS 11.3, but it haven’t been widespread used. Last year, Apple actively updated it to version 2.0. After the upgrading, the conversion behaviors such as installation, in-app registration, and purchase brought by IDFA can be solved. However, the above two versions only support StoreKit-Rendered Ads.

Recently, Apple launched SKAdNetwork version 2.2 once again. On the basis of the original tracking of App ads, it began to support tracking the click effects of ads in web pages such as iOS and iPadOS. In addition, it also added View-Through Ads, including video, audio and other forms of attribution tracking, developers can evaluate which ads are the most effective and can promote user conversion (such as purchase or registration).

Although SKAdNetwork 2.2 cannot fully compensate for the drawbacks brought by IDFA, it undoubtedly releases some positive signals. Advertisers and developers can not only customize the advertising format and track data, but also analyze the proportion of new and old users through callback data. We believe that with the continuous iterative update of the version, the impact of the adjustment of IDFA access permissions will be greatly reduced in the future.

At present, the improvement of SKAdNetwork's attribution statistics function will take a long time, and the effect remains to be observed. Prior to this, IDFA access restrictions prevented advertising platforms from pushing targeted advertisements to some users who updated iOS 14. Advertisers are likely to reduce their advertising costs and focus on choosing media advertising platforms with user portraits.

Therefore, developers need to anticipate the reduction in advertising revenue in advance. In addition, they can take relevant measures to reduce the loss of advertising revenue as much as possible, such as using TopOn's traffic grouping management function to configure different advertising strategies for IDFA users.

In accordance with Apple’s official requirement that “no unique identification or fingerprints are used to collect equipment and uder data” requirements, global advertising platforms have all made compliance adjustments to their SDKs.

Currently, TopOn SDK iOS V5.7.26 and later versions have been adapted. Developers can complete the SDK integration of the above versions according to the TopOn document center.

For more details, please consult the business operations team at business@toponad.com to prepare for the launch of iOS 14.5 in advance.