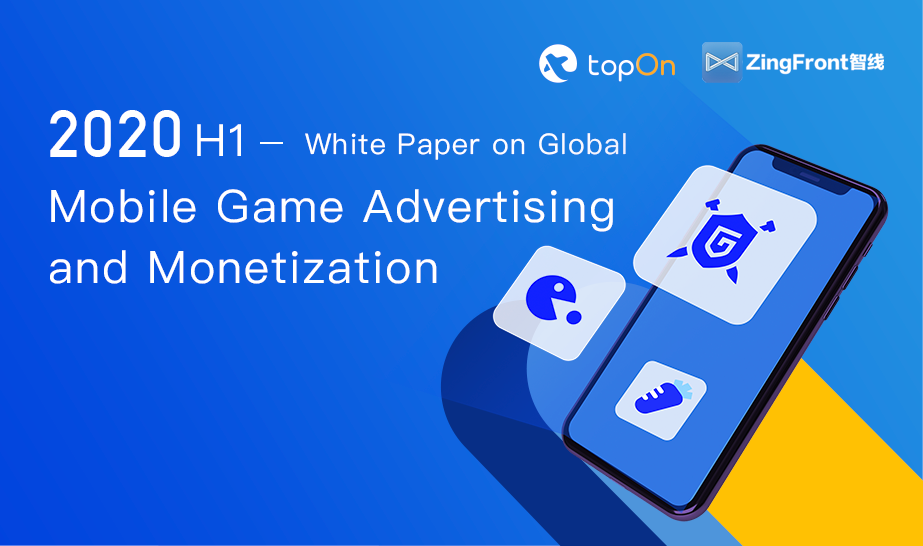 The following is an excerpt from the white paper. For the full version, please click the White Paper on Global Mobile Game Advertising and Monetization (H1 2020).

In H1 2020, game advertisers increased by 10% year-on-year, accounting for 32% of all apps. It is estimated that in H1 2021, there will be 40k active advertisers around the globe, a 15% increase compared with 2020. With COVID-19 spreading to the world in early 2020, active advertisers fell into significant decline from January, and the largest quarter-on-quarter decline was in February, representing 3.82%.

The media buying for hardcore games are the largest media buyer, taking 42.30% of all creative. Casual and midcore games take a similar share, about 30% of all types of creative.

Most of the ad creative in H1 2020 was video creative, occupying 46%, followed by image creative, occupying 28%. Meanwhile, dynamic creative (videos, playable ads) is favored by increasing advertisers because of their richer display and better interactivity; with the development of the mobile Internet around the globe and lower rates for mobile Internet services, dynamic creative will occupy a higher and higher proportion, which is already close to 50% in 2020.

Among ad networks, Google Ads and Facebook hold a dominant position on Android and iOS, respectively.

Google Ads has relatively balanced game genres, of which puzzle games are the most represented and the fastest-growing advertiser, growing by 2.56% in H1 2020 over the same period in 2019. Facebook is obviously dominated by hardcore games, which occupy 43%. Among the game genres, puzzle game advertisers have the highest share of 18.79%, but arcade game advertisers have the largest increase, 4.81% higher than the same period in 2019.

In spite of Google Ads and Facebook’s dominance in the global market, ironSource, Unity Ads, AppLovin and Nativex rose in the outburst of global gaming to grab 43% of the creative in the game app advertising market in H2 2019.

All the four networks have the highest proportion of casual game creative, with Nativex having nearly 50%, followed by ironSource, 47%. The United States, where the most mobile game creative is advertised, occupies the top spot in many hot networks rankings.

After checking Chinese mainstream short video platforms (douyin.com, ixigua,com, huoshanzhibo.com, pipixia, kuaishou.com, tudou.com), it is observed that the largest share of 34% in H1 2020 goes to RPG advertisers, followed by SLG and ACT advertisers, accounting for 16% and 11%, respectively.

Given the trends in quantity of advertisers and creative in major markets, all have been impacted by COVID-19 without much discrimination.

The US, due to the COVID-19 outbreak and the unstable social environment, saw declining active creative starting May. China had declining active advertisers and creative starting March, not showing signs of recovery until June. Japan’s active advertisers continued to decrease quarter-on-quarter after February 2020 due to the pandemic, while South Korea posted a modest increase of ad creative in February, which then fell into decline in March; however, with the pandemic contained, the figures of both markets rebounded in June. European markets had quite different performance: The UK had little change into 2020, except a surprisingly slight rise. Germany had a slight drop in May, but was also relatively stable. In emerging markets, both India and Indonesia started a significant decline in March. Brazil was hard-hit by COVID-19, but its government didn’t force quarantine, so the overall trend in the quantity of advertisers and creative went upward. In Russia, owing to the outbreak of COVID-19, active advertisers decreased slightly in April, but there was a significant increase in May, and the trend then remained stable.

SocialPeta also gives a snapshot of the global top 50 hot advertisers. All the top 3 advertisers in the charts are casual games. The vast majority of the games are iOS advertisers while Android advertisers only occupy 15 seats in the top 50. Internet-monetizing games also have impressive performance in terms of traffic buying. Color fill as a game genre is also quite worthy of attention. The chart-topper Coloring Book – Color by Number & Paint by Number has garnered a super-high popularity value of over 2.2m after more than 220 days of advertising.

To learn more about the Advertising, please click the White Paper on Global Mobile Game Advertising and Monetization (H1 2020).

The monetization chapter is based on the comprehensive analysis of TopOn, a global mobile ad mediation and monetization platform. The advertising monetization data is cumulatively generated from January to June 2020, based on 3000+ cooperative games, 25 million+ daily active users, 200 million+ daily ad impressions, 1 billion+ daily requests. The data from European, American, Japanese, Korean, and Chinese markets accounted for more than 90% of the total.

From the perspective of game type and advertisement style, the rewarded video eCPM of hardcore games has the best performance, reaching $47.45 on iOS devices, which is nearly four times higher than that of casual games with the most widely used advertising monetization. In the same type of games, eCPM of iOS devices has an advantage over Android’s, which is about 35% higher overall.

As an important indicator to show the revenue value created by users in the game life cycle, LTV is also applicable to show the advertising revenue contributed by users in game. From the data provided by TopOn, casual games have the highest LTV in the early stage. Due to the better long-term retention of midcore games, their LTV gradually overtakes casual games. Although eCPM of hardcore games is significantly higher than that of other game types, their LTV of ad is low. Because the revenue of hardcore games mainly come from in-game purchase, and rewarded videos are more used as tools to help improve user engagement and increase in-app purchase rate.

From the perspective of casual games, the median eCPM in Japan among the major countries that rewarded videos is the best, with $12.82 on Android and $17.44 on iOS. Interstitial performance of the United States ranks first in both Android and iOS at $6.8 and $12.84 respectively. China’s overall performance on Android and iOS ranked fourth after the United States, Japan and South Korea, only the interstitial eCPM on iOS is slightly higher than that of South Korea, at $8.96 and $8.25 respectively. The eCPMs of rewarded video and interstitial are the lowest in India, especially Android eCPM is less than $1.

From the perspective of LTV, LTV1 of the United States performs best on both ends, with Android $0.17 USD. The LTV of iOS devices is 26% higher than Android ones, about $0.23 USD. Since LTV14, both ends of Japan have gradually overtaken United States and reaches the highest LTV30 among all regions. From a global perspective, in the first half of 2020, the LTV value of casual games is ranked in the order of US>East Asia>Europe>Latin America and Latin America.

In terms of retention, the overall retention of users in Japan is still the highest, with 36.49% of the secondary retention, but slightly lower than 42.19% of casual games. Russia has the lowest LTV1 rate, less than 30%, but its user stickiness is higher than that of India and Indonesia.

Hardcore games are mainly based on rewarded videos, so the eCPM of rewarded videos in each regions is more helpful for your reference. The top three regions for Android and iOS hardcore games are Japan, United States, and South Korea. In hardcore games, the performance of eCPM in China is similar to or even slightly ahead of that in Europe, which indirectly reflects that users’ purchasing ability has begun to catch up with developed countries.

From a national perspective, major global markets have been affected by the COVIC-19 and have experienced a decline in eCPM. The median of eCPM on Android and iOS in Chinese market all entered the lowest performance in March, especially rewarded video on iOS dropped significantly, from $20.2 in January to $11.12.

In Japan, the eCPM of Android rewarded videos was also affected by the epidemic, and began to decline sharply in March, after which the eCPM showed a gradual recovery. As in United States, interstitial have been on the rise since April. The eCPM on the iOS in Japan is not significantly affected by the epidemic, the overall performance is relatively stable, and the price is the highest.

The overall fluctuation trend of Europe and the United Kingdom and Germany is smaller than that of the United States, Japan, China, and South Korea. Even the German Android-devices rewarded video and interstitial eCPM are still increasing. The performance of emerging markets is even more different from the performance of the above countries. Although India, Indonesia, Brazil, and Russia have experienced short-term declines in eCPM performance due to the epidemic, the overall growth has increased in volatility. Earlier, according to Google’s observations, mobile game downloads surged in emerging countries during the epidemic. The main factor was the difficulty of migrant workers traveling, which in turn led to a surge in the country’s gaming population, attracting a large number of advertisers to gain users.