Recently, "Pocket Sniper!", which is monetized by TopOn, has officially entered the US iOS market. After 6 days of launch, it reached the top of the iOS free list and game list in the United States, and has been on the top of the list so far. As of July 14, the game has been listed in 98 countries or regions, including the top ten in the iOS game category list in the United States, Canada, the United Kingdom, and Australia. 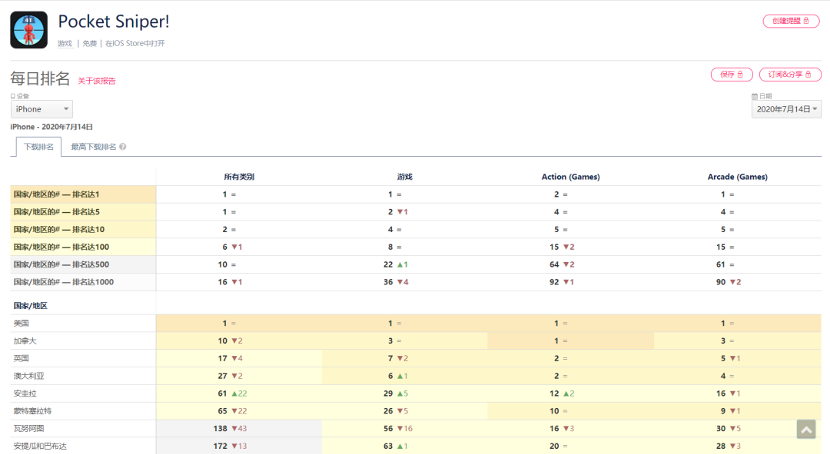 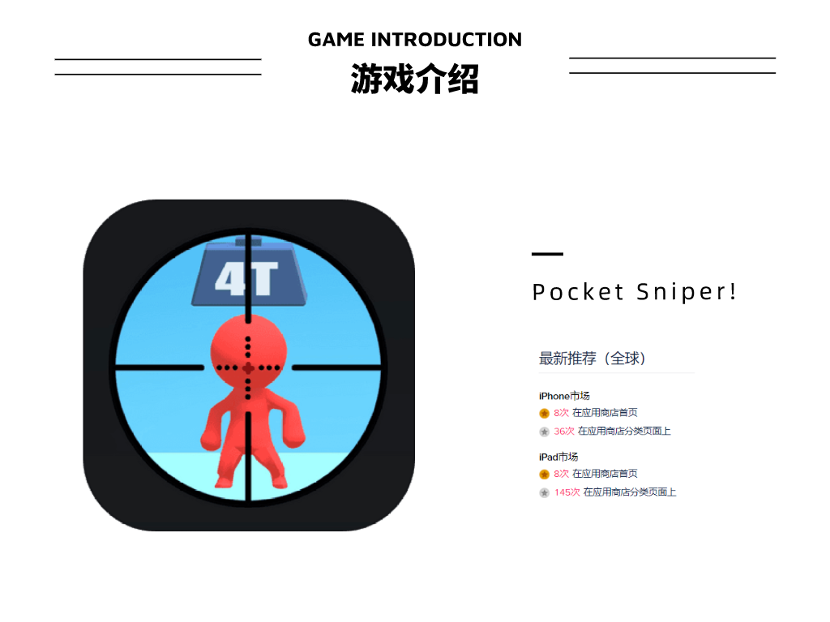 "Pocket Sniper!" is a first-person casual shooting game with a 3D game scene. Player becomes a sharpshooter and uses a sniper rifle to clear the game targets to complete the level. The game operation is very simple, through "long press and drag" to complete the aim and perspective movement, players can also achieve efficient kills by shooting explosive barrels, wooden blocks, ice cubes, balloons and other props. The game has a wealth of challenge scenarios, mission systems, and levels of different difficulty. It also provides a firearms library. Players can unlock guns and skins through gold coins to increase the damage value of weapons. After clearing a certain number of targets, it can also unlock the RPG rocket launcher and use missile attacks to speed up the clearance.

As a lightly casual free game, "Pocket Sniper!" uses an advertising monetization model. There are several application scenarios for rewarded videos and interstitials in the game.

Display timing: return to the main interface, switch back to the screen, and successfully pass customs 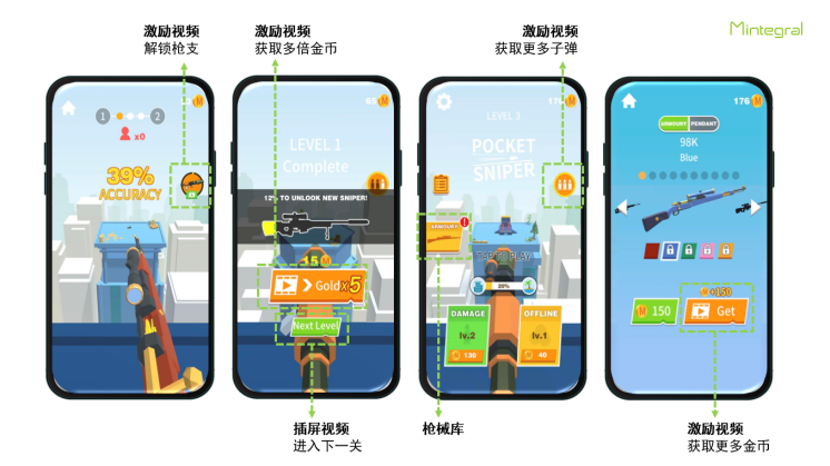 In terms of advertising monetization strategy, the "Pocket Sniper!" operation team has refined management of monetized traffic through multiple functions of TopOn.

With the help of segment grouping function, game users of "Pocket Sniper!" are divided according to the country. The optimize personalized advertising strategies based on the data performance of different countries, effectively improving overall revenue. And adjust the media buying price of users in different regions according to the eCPM and LTV of ads monetization.

According to the API data, the advertising platform with higher revenue is requested first, which reduces the impact of the revenue fluctuation of a single advertising platform on the overall revenue. To guide the flow of matrix products with cross-promotion function. Through the parallel request and Header Bidding function, the value of each ad request can be fully utilized and the fill rate can be improved. 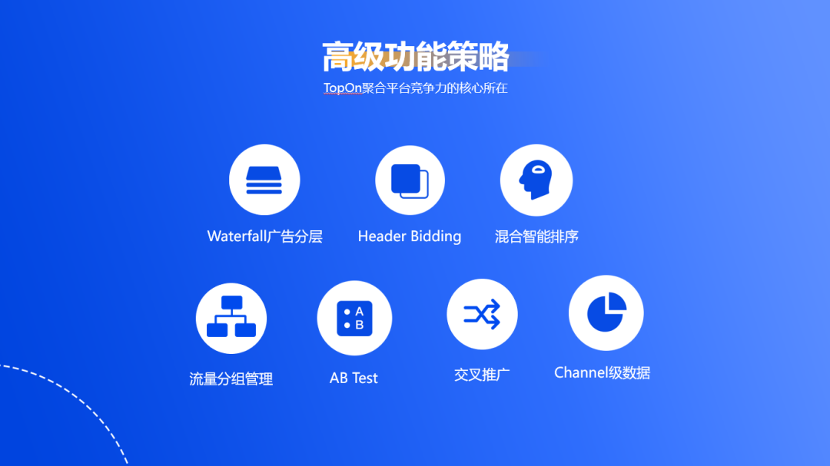 With the full support and cooperation of TopOn’s team, the games’ advertising revenue has achieved a 20% increase, and has reached the top of the US iOS free list and game list.

In the current European and American markets, there are already many games similar to "Pocket Sniper!", For example, SayGamesz’s "Johnny Trigger" won the global download champion with 44.5 million downloads in a single month at the end of December 2019. Playgendary's "Hitmasters" also ranked fifth in the May 2020 ultra-casual game download list released on Sensor Tower in December 2019. 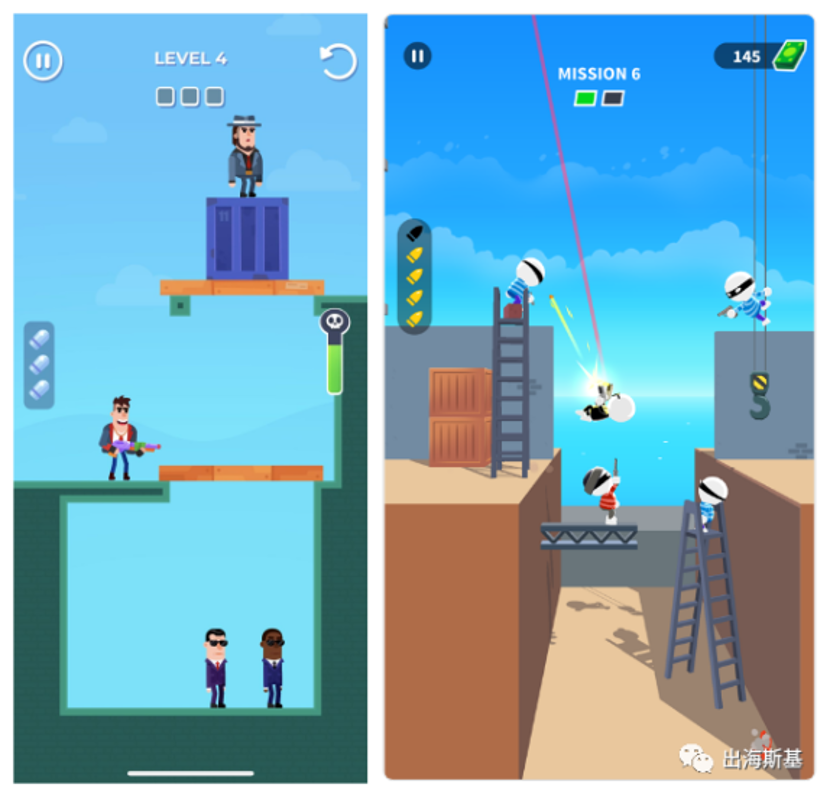 Compared with the above two games, "Pocket Sniper!" adopts a 3D game scene design, which gives players a stronger visual impact. At the same time, the motion and sound effects of the sniper rifle, the drag and strike of the camera all give players a more realistic sense of immersion. Therefore, it can stand out in the fiercely competitive European and American markets, and its subsequent achievements in the global market are also worthy of attention.